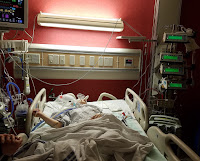 Today, while you march the streets "protesting" the results of the election, my nine-year-old daughter endured nine hours in the operating room. Tonight, while you destroyed American symbols and burned effigies of the President Elect, my daughter laid in an ICU bed, intubated and left on a breathing machine. While you gather angrily in masses online to hashtag for violence and death, the numbers of the arterial line in my daughter's arm fluctuate outside the exceptionable medical standards. You are heated over the democratic process that has served our country for nearly two-and-a-half centuries. Well, let me tell you, I'm indignant as well -- at you, at your lack of empathy and at your hypocrisy!
Let me clarify. What you believe to be a protest is not. A protest is when there is a redressing of a grievance with the desire for a compromise. A protest might even be a strong disapproval of something which is unfair, illegal or unjust. But what you are doing is not a protest; it's a tantrum.
I know tantrums well, you see. For in addition to the daughter who is hospitalized tonight, I have twin toddlers. When one of them is given a meal rather than the candy he had hope to receive, one of those boys might throw his drink, dump his plate, kick, scream or even cry. I know a tantrum when I see one, and I have seen many. You are throwing a tantrum.
If you were three years old, like my twins, I would probably ignore your behavior until you tired out and fell asleep. But you are not toddlers; you are adults - adults with cognition, abstract thought and logical faculties. Therefore, you are capable of self-evaluation and the ability to discern the motives behind your behavior. And for that reason, I offer my opinion and advice.
I acknowledge your passion and perspective. You see a philosophy that works and believe strongly that it should prevail. There is nothing wrong with that - and it gives me great hope for the future because so many of our next leaders have such heart. But that intensity must be tempered with an agreement of the established rules. If you want to change those rules, fine - do it, but until they are changed, don't become so self-righteous that you believe yourself above them.
You obviously have a lot of energy. It takes a lot to march in the street, chanting and yelling through bullhorns. It requires stamina to burn and destroy images to show your fervor. However, you must learn to channel that spirit into things that truly effectively help others. Additionally, it will behoove you to learn that your perspective is neither supreme nor unique. Others will differ from you, and whether they are right or wrong, you can learn from them.
In short, stop feeling sorry for yourself because the election didn't turn out to be the result you wanted. There are a boatload of people who don't really care you lost. But more importantly, there are a bunch of others, really hurting and in real pain, who just see your behavior as entitled and spoiled. Believe me, your protests have garnered no sympathy from either me or from my daughter. 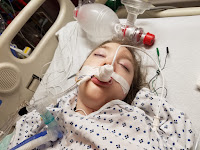 So in hope for a better change, I offer this pragmatic advice of not only about what to stop doing but also about what to do instead. Rather than expending so much time spewing anger and hatred, rather than funneling your energy calling for the assassination of newly elected officials, take your strength and do something positive.
There are many other people in the hospital where my daughter will remain for the next week. Just down the street, there is a building filled with families of children diagnosed with serious or terminal cancers. Sick and recovering people are not difficult to find. Go visit them. Give them some encouragement and support. Read a book to one of those bedridden youngsters.
If you have apprehension visiting an infirmary, pick something else. There are elderly homes filled with people longing for visitors. The stories and experiences they have is astounding. The secret lore they keep will soon be lost, and the warmth you can give with just a smile and polite gesture is more positive than you know.
Don't like that idea either? How about Special Olympics? Highways and State Parks need volunteers to pick up trash. Your local library probably has books which need to be re-shelved. Animal shelters need help. And both the Red Cross and Salvation Army will have a list of ways to help. There is no excuse not to use that energy in a way that helps others.
Let me remind you that just days ago, we were told that the opposition would be cry-babies and riot in the street, challenging the results of a rigged election. You laughed at their notion and silly ways. You convinced yourself that they would do this because they could not accept the truth and their philosophy was filled with hate and fear and negativity.
Guess who is in the streets rioting now? Yes, you - the enlightened ones. The ones above hate and destruction. Stop and think about that for a minute.
With all your spirit and compassion for what you believe to be the better way, with all the methods that will produce a brighter future, use that energy for what you claim to believe. Prove your love-trumps-hate and kindness-wins concepts are worth more than just idle words. Stop the hate you claim to be wrong and harness that energy to do something positive in the world.
Good luck.
Posted by Dj Hackney at 11:00 PM
Email ThisBlogThis!Share to TwitterShare to FacebookShare to Pinterest
Tags: America, Attitude, Blessings, Change, Cognition, Compassion, Conflict, Death, Family, Health, Misfortune, Parenting, Philosophy, Politics, Suffering