I’m not sure of the average age of the readers of my blog, but those who are around mine will remember the classic 80s movie, Weird Science. It starred the master-geek of the decade, Anthony Michael Hall, as a kid who creates a sexy woman, played by Kelly LeBrock, by hacking into the internet (before we called it that) and downloading vast knowledge and power into a sentient being.

Yes, it was one of those highly believable plots from the 80s with testosterone-filled geeks trying to figure out what to do with it. Plus, the second “jerk role” for a young Bill Paxton, after being stabbed by the Terminator. Also there was some other antagonist in the film who grew up to be Iron-Man…but I digress.
At a latter part of the film, four boys wearing bras on their heads are trying to recreate the process as a bartered deal to trade another sexy-fembot-like woman for the geeks’ popularity. Of course, this fails because they missed a step, which results in a nuclear missile appearing. This really makes sense if you’ve seen the film.
At this moment, the sexy but matronly original creation appears to summarize the basic idea behind the film. Lisa asks the boys, “When are you gonna learn that people will like you for who you are, not for what you can give them?” Of course, this is when she lures the Road-Warrior mutants to the party to prove the boys’ true honorable character. Again, it really makes sense.
Nonetheless, in my honest inventory of who I am, who I attract, who I want to be with (both friends and lovers) – this concept has become an important topic of my psyche. This also feeds into the fear of success concept from my previous post. I forget that I have intrinsic value just by my own character. I forget that I don’t have to purchase the affections of other people. I forget that when someone loves me, unconditionally and just for being me, then I don’t have to fear a repression in the economy of my gifts or deeds.
Now – this doesn’t mean I can be a do-nothing, bring-nada-to-the-table jerk and demand others to respect me. But what it does mean is that I don’t have to impress anyone in exchange for friendliness or offer a favor to receive fondness. While living over four decades now, I still struggle with this junior-high insecurity; and it lives larger in my heart than I realized.
Lastly, I’m not saying that any of my friends reciprocate their affinity towards me because I feel this way or do these things. I’m not saying my ex-wife or my former fiancé only loved me because of how I performed or items I bought. I believe those in my life, past and present, are not so shallow for this to be the only factor. However, I did practice this art, whether I knew it or not – and in doing so, it sent a message to others that it was okay to use me…and probably at times, people did – and I allowed it, and allowed it guilt-free.
Something new to work on. But this is good. As I said previously, I’m building my character anew from the wreckage of my life-ship which went off course. My goal, as always, is to be honest about my brokenness, fess up to it and take the responsibility. Then mend myself with the help of friends, family and the Father. Perhaps not everyone believes I do that, but I don’t have to prove it to them; I need only be true to myself.
By the way, what ever happened to the grandparents? Are they still in ageless stasis in the kitchen pantry? 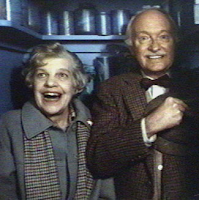