Hulk Is A SuperVillain

Growing up, I read comic books. In those stories was the Hulk, a giant green mass of unearthly strength. I also watched the TV story of the same with Bill Bixby and Lou Ferrigno. I really enjoyed the narrative, but as I've grown older, I have considered this tale a bit differently.

Let's consider the premise. The man, Bruce Banner, is a mild-mannered individual of logic and intellect. He's a thinker, a kind person. However, when he becomes angry, that anger envelops him, consumes him and transforms him. Within seconds there is a green goliath of fuming fury, leaving a path of destruction in its wake. The rage continues and damage is dealt until hours later (sometimes even days) until the Hulk calms down, rests and slowly reverts back to the benign person once again. After the beast is gone, Banner feels embarrassed, even guilty, and he tries to hide the dark secret of anger lurking inside of himself. Banner at times feels like it is hopeless to rid himself of the Hulk. 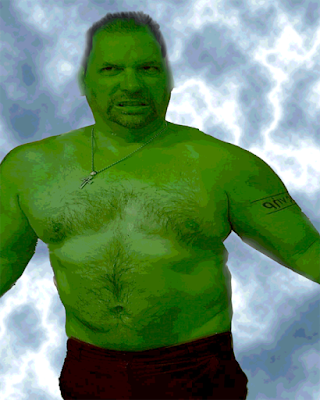 Sound familiar? It does to me. I recognize this character whenever I look in the mirror. Intention or not, the Hulk causes harm and wrecks things. Through the comic-book story, the Hulk is just misunderstood and somehow his rage and smashing brings about the success against the challenge or adversary. We are even led to feel sorry for Banner. So, the Hulk is an understandable even related character, but he is no superhero.
When the Hulk is real however, the demolition is nothing but loss. No one feel sorry for a real man of out-of-control anger. And yes, after he returns to his senses, he feels overwhelming guilt to the point he doesn't even blame those mad at him. The real man is embarrassed and refuses to acknowledge his internal anger. Often he hides it away and refused to deal with it.
A little known fact to those who are not comic-book nerds is that the Bruce killed his father, primarily due to the Hulk's existence. This is echoed in the 2003 movie, but this time it was the Hulk that performed the act. While the character of Banner's father is a horrible person and was clearly the catalyst of his own demise, the story is more than a dramatic event for character development in an ongoing tale about the jade giant. It is symbolism about rage killing fatherhood -- or at least that's my interpretation beyond the story line when my Hulk appears.
I'm not saying angry people fight with their fathers. I don't; however, this might be true for some. But those enraged, who are also fathers, may allow their anger to damage or even kill their relationships with the children. In today's world, the lumbering Hulk has run off many wives. Many real men are alone, save for whatever connection they can keep with their kids. But the Hulk has the potential to kill fatherhood too.
As real men look in the mirror and see the Hulk staring back, like Bruce Banner they hope for a way to kill the monster. Often like the character, these men feel the goal is hopeless. They hide the truth of their Hulk and hide the damage it does. Of course, this does virtually nothing to destroy or even manage their anger. Sometimes such men punish, even physically harm themselves, but sending combatants to subdue or destroy the Hulk doesn't work either. According to Marvel, the Canadian Department K tried that with Weapon-X, and it didn't work then either. Real life will not yield better results.
There are success stories, but the one of the first steps is admitting, recognizing the Hulk for the beast it is. We must recognize Hulk as not a driving force, not as a event of happenstance, not a justification of circumstances, and definitely not as a hero. To make progress, the rage in us symbolized by the Hulk here must be seen the villain, perhaps a Super Villain for some. Maybe the Hulk never completely goes away, but it can be contained and managed.
Posted by Dj Hackney at 3:00 PM
Email ThisBlogThis!Share to TwitterShare to FacebookShare to Pinterest
Tags: Attitude, Change, Cognition, Conflict, Family, Health, Marriage, Misfortune, Movie, Skepticism, Suffering, Television