I recently read an article in the LA Times by Susan Silk and Barry Goldman about being appropriate during times of difficulty. They described a method devised by Susan to know when and to whom it is okay to vent and when and to whom to only speak supportively.
The concept is simple. Start with the person who is suffering the crisis. That person is allowed to say anything to anyone in any way about the issue. Everyone else just has to “take it.” In the article's example, a person named Katie had suffered an aneurysm; thus, in that case, Katie is the name to write down. Draw a tight circle around the name to represent that single person. 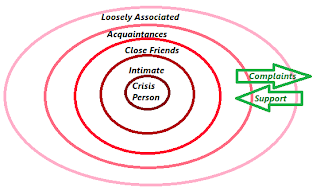 Next, draw another circle around this smallest circle and write names of people very close to the crisis in the ring formed between the two. In the example, it was her husband. Then create another ring and write in the next most intimate relationships. Repeat the process of drawing larger rings, writing in the next closest people.
Once complete, what results is called a Kvetching Order. It is probably best to literally draw it when first putting it in practice. After a while, it might just become a mental exercise.
So now what? Well, the rules are simple. Find which ring where you are located? When you become weary or stressed because of the crisis, vent to people only in those rings outside of your own. For people in your own ring or tighter, you only allow yourself to make supportive statements or actions. That’s how it works.
This is a great starting concept and good habit to develop, whether the crisis is big or small. It can be an immense influence for one’s likability. I thought this was a brilliant mechanism. Moreover, it seems to be obviously common-sense once hearing it explained. However, so few practice what is so obviously proper.
Expanding on this idea, I began to wonder what to do when someone doesn’t follow these rules. After all, this politeness is an issue of legality. Yet most of us would likely agree breaking the kvetching order is rude. How do we point out to another they broke the rules without crossing that socially awkward line as well?
I think the same rules apply but perhaps in reverse. Figure out where you reside in the order of rings. If the person complaining is doing so to someone even further inside than themselves, then offer support to both people, the venter and the victim. To the victim, acknowledge the incident and explain you are sorry they had to suffer through that. Of course, be sure not to do so in front of the person griping. Also privately, remind the complainer the person they just dumped all over is suffer too and perhaps feeling the same feelings even more intensely. Then offer to that person if they need to vent, please do so but bring those grievances to you.
If you are on the inside of the person complaining, I think it is perfectly acceptable to be assertive and ask them to stop. A polite delivery may be difficult, but it is important to deliver an unpleasant message in a courteous way. Nonetheless, simple state you understand how stressful this situation is and you know venting is a necessary thing; however, tell the person you are just not emotionally equipped to be supportive for them at this time. Acknowledge and validate their feelings, but politely ask them to share them with someone else not so close to the center of the trauma.
We all have crises and stresses. Knowing how to be helpful and knowing from whom to seek support makes the dealings of a tragedy, big or small, run much smoother. I hope this helps.
Posted by Dj Hackney at 5:30 PM
Email ThisBlogThis!Share to TwitterShare to FacebookShare to Pinterest
Tags: Attitude, Compassion, Conflict, Family, Friends, Health, Misfortune, Suffering